The blue horizon in the corner of my eye

A permeable body, unique and autonomous, a body that adjusts and accommodates other people’s movements, a body that receives and secretes. A landscape where observations, physical and organic processes create a weave that embraces and extends into an infinity in differing and similar rhythms. When we are in proximity of others we are influenced by their physical processes; we exchange molecules, are affected by their breathing, smell, the way they move and numerous other hardly noticeable events. These processes synchronize without us necessarily deciding to do so. Breath, pulse, skin, gestures, movements become affected. One doesn’t have to like or want, it will happen if one doesn’t actively opposes it. We move in the weave, we do not collide with each-other, we coexist even when we struggle, fight or resist in the stream that is formed by precisely those movements.

Sybrig Dokter  has worked at Weld with five performers during a period of two weeks. Permeability and synchronicity have been the base of  the work with ‘The blue horizon in the corner of my eye’. Practices of the project Falling I – II where the performers shared the precarious space of sleep and dreaming as a way to synchronize, have reappeared.

With support by Weld, Stockholm. 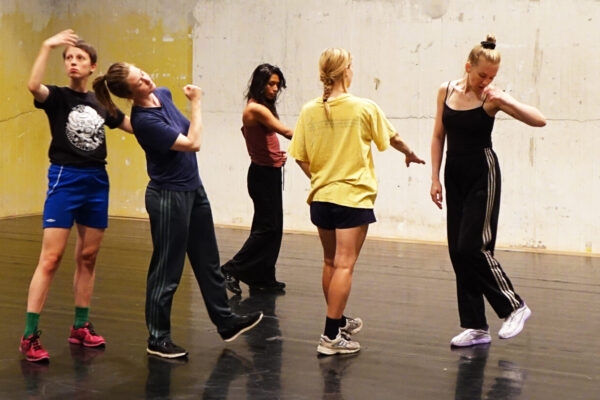 walking a home by Alva Willemark